Transforming Organisations By Integrating Technologies18 May 2021 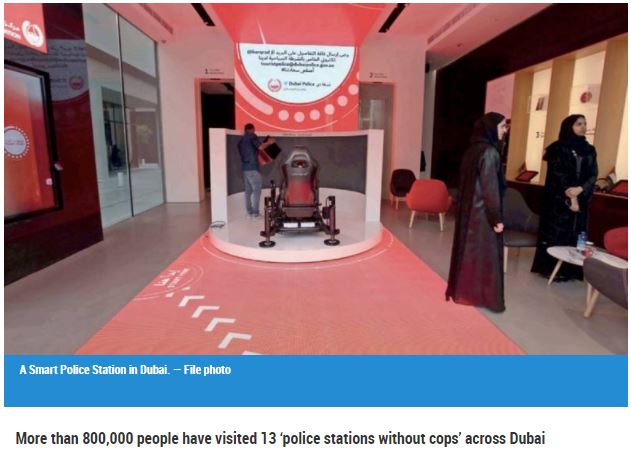 When the Covid-19 pandemic restricted face-to-face interactions last year, it had been easy for the Dubai Police to serve the public because it already had the platforms needed for digital transactions. One of its innovative projects in particular, the Smart Police Station (SPS), has proven to be a big help to the community.

More than 800,000 people have visited these ‘police stations without cops’ across Dubai. Most of the incidents reported to these smart facilities were related to financial fraud, counterfeit official documents, and breach of trust, said Lt Khaled Mohammed Barakat Banasser, an official who works for the investigation operations at SPS, Dubai Police.

So far, the Dubai Police have already opened 13 Smart Police Stations. The first was opened in 2017 and since then, 12 others have been unveiled through the years amid an uptick in customers’ footfall. In 2020, four new SPS facilities were opened in the Jebel Ali Free Zone Facility (JAFZA), Dubai Design District, Silicon Oasis, and Al Lisaili district.

The SPS is a contactless facility, which makes it a safe option for residents especially amid the pandemic. Data showed that these facilities had conducted 99,251 transactions without any human intervention.

Lt Banasser said the SPS has emerged as a convenient hub for the public because officials are available 24/7 via a normal voice or video call. Some 4,471 transactions were made through these facilities in 2020 alone.

Even without staff members on site, customers found it easy to avail of police services at the SPS. Besides having a user-friendly platform, it allows visitors to choose their preferred language. Five days after a complaint is raised, a customer is at liberty to pursue a follow-up action while using his transaction number.

The Dubai Police are looking at ramping up the strength of SPS facilities. Most of them would come up in densely populated neighbourhoods or newer settlements. Earlier, talks were held between Dubai Police authorities and their counterparts in the other emirates, but a concrete decision is yet to be taken.

The SPS centres have emerged as showpiece facilities, attracting delegates from various countries. Dubai Police have been cooperating with several nations about the technology and users’ experience of SPS, a first-of-its-kind facility in the world.